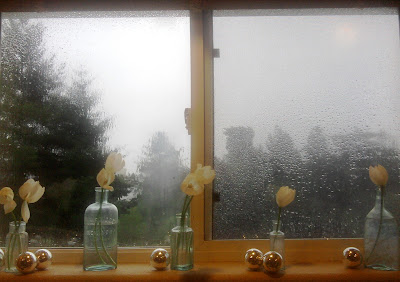 When I started this blog, I acknowledged that change is not only a part of life, it is life. The winds of change can sometimes be nothing but a whispering breeze and other times whip through with the might of a hurricane. Right now change is everywhere I look. It's in every inhale, it's all over me like skin. It's a bit exhausting. But it's also exhilarating.

My husband, Stan, and I moved again, right before Christmas. I do not recommend that you try this. Especially if you are trying to work and finish the latest draft of your latest novel. And if you, like me, are lousy at multitasking.

But we knew that the cabin would be a temporary stop while we regrouped and figured out a plan. Stan had made a brave career change in mid-life to something he actually enjoys doing. (There really are a few positive aspects to a sucky economy.) An opportunity came up, and now we're about 20 minutes from the cabin, back in the place we lived years ago, a lovely apartment above a barn (which I know sounds like an oxymoron, but it really is lovely) at the end of a country road, with a view of forest and vineyards. We've dubbed it The Barngalow, and it sits on the 8-acre property where we were married, so it holds a lot of good memories.

All four kids -- Daniel, Michael, Karli, and Taylor -- were here for Christmas. Actually, they were here on the Third Day After Christmas, which is when our blenderized family could squeeze in a celebration. The girls, 19 and 17, live with their mom now. When I see them I'm always struck by their beauty -- the kind that's so young and effortless.

Unfortunately, it's rare that we're all together, but I was grateful for the short time we had, and it felt good to be opening presents in a place where we had all opened presents years ago. Even if some of the boxes around us were marked Linen Closet and Living Room/Books instead of Merry Christmas, I had managed to get the tree up and decorated, put the bulk of the place in functioning order, and even finish the novel before everyone arrived.

And then I promptly passed out. Not really, but I seriously considered it.

After New Year's, the boys and I took a mini road trip to see my stepmom and stepbrother. My dad died six years ago this month, and if I can get myself in the right frame of mind, I'll try to write about him another time. It was wonderful to see Jan and Marc. And yet it was bittersweet to be in the home where my father should be but isn't. There is some change that I will never get used to.

Jan loaded our plates with delicious comfort food and we played Bananagrams, charades, cards, and that game where you wear some famous person's name on a piece of paper stuck to your forehead and ask yes/no questions in order to try to figure out who you are.

If I'd worn a piece of paper on my head for the last 23 years that told people who I was in only one word, it would have said Mom. I'm other things, of course. I'm a writer, wife, friend, daughter, sister, lover of books, trees, dark chocolate with nuts, and Mad Men, to name a few. But foremost, always, a Mom.

I still vividly remember that day I became a mother, and as corny and 1950s pre-feminist as it may sound, I felt such a sense of complete and utter fulfillment -- as if suddenly the universe had shifted, and I had fallen into the place I was supposed to fit, perfectly. As perfectly as Daniel fit into my arms.

And then, eventually, my hormones settled down.

But, truly, being a mom has been my most favorite thing in life. It's been the most gut wrenching difficult and the most rewarding, by far. It's been the thing I knew I was meant to do, even though I didn't do it perfectly, and some days not very well at all. But as much as I loved being a mom, I realized it was not my sole purpose in life. It was the biggie, no doubt. But there was also writing, and I wrote around nap times and on the edges of napkins at Chuck E. Cheese, and eventually started getting up at 4 a.m. to work on a novel. This will date me even more, but I remember typing short stories on my grandfather's electric typewriter while Daniel napped, using White-Out to correct my typos. I did this all with very little success, but I wrote because I loved to, even needed to, as overly dramatic as that may sound.

Once I had kids, I wanted to work from home, so I started working as a freelance copywriter to pay the bills, writing slogans, ads, brochures, articles, and later web sites. I still picked away at writing fiction, too.

I was there for my kids. But sometimes, I admit, I wasn't there for them, in the sense that writers often live in two worlds and you'll see our eyes glaze over while we have a particularly riveting conversation with one of the characters who lives in our minds. This is not something I'm particularly proud of, and which often leaves my husband shaking his head, saying, "You writers are a special breed." But because I was a Mom first, my children's voices would snap me back into the real world. Kids' howls always trump fiction. Whereas a husband's lengthy explanation of why the car sounds funny? Not so much.

Speaking of the car, I should get back to our road trip. While we were visiting, Daniel, Michael, Marc and I walked down to the lake. The day was cold and the sky hung low and gray. Daniel would be returning to Alaska in a few more days to finish his degree in biology. Michael, who lived 20 minutes away from us, would be leaving soon, too, at the end of the month, to study abroad in Italy. It was absolutely official: my boys had become men. I would still be, always be, their mom. I know this. But the wind was picking up, that last leaf on the tree was twirling, about to cut loose.

When we got to the lake, the guys started skipping rocks. Not nice flat stones, but big, heavy chunks of gravel. Theirs skipped freely across the water, 10, 15, even 20 times. Those rocks were like Daniel skipping off to Kindergarten that first day, dressed in the cowboy boots he always insisted on wearing and shorts, thrilled to be starting school, while I followed behind, blinking back tears. Skip, skip, skippety skip. And now their rocks happily skittered across the surface while my attempts ended with big loud kerplunks. There was teasing, and a few imitations of my form (Ha! Thank goodness they were only joking and I really don't look that uncoordinated.) But then there were a few patient lessons and when my chunky gravel actually skipped once I jumped up and down like a little kid. They said, "Good job," and I thought, Oh, God. I'm so not ready for parent-child role reversal.

If I were depressed, I might have conjured up some metaphor about youth and unlimited possibility juxtaposed with getting older and sinking head-first deep into the muddy muck. Fortunately, I'm not depressed. Just ever so acutely aware of this change. And while I do see their lives taking off -- soaring even -- I see mine evolving. I may not be skipping across the world, but now I'm at a point where my writing is my focus. Where it isn't scribbled in on the edges. Where the days are still and quiet enough that I can sink down even deeper into my other worlds. Where perhaps my words might actually reverberate out and reach across a distance. Where I'm still Mom, but I don't need to wear that badge on my forehead.

We drove home, just the three of us, Daniel, Michael, and me. Like the old days. But different. A few days later, Stan and I took Daniel to the airport. I hugged my tall son, burying my head into his chest, my tears slipping onto his jacket. "Bye Momma," he said, gentle, kind, and good. Stan stood to the side, eyes a bit misty. He hugged Daniel good-bye, too, and then let me cry on his shoulder when we got back to the car.

This weekend we helped Michael move out of his apartment. He's living with us for two weeks and then we'll take him to the airport. I have a lump in my throat when I think of it, and yet, I'm more excited than anyone for him.

So in between all this moving and saying hard good-byes, something wonderful happened last Thursday.  I got a call from a literary agent. Not just any literary agent, but the one I really, really wanted to be my literary agent. She loves the novel. She offered to represent me.

(I think exclamation points may be the punctuational equivalent of stone skips.)

Way, way back, when I was in seventh grade, my creative writing teacher -- who, unlike my math teacher, wrote nice things on my papers with a lot of exclamation points -- said, "Seré, do you realize what you've just done with your pen?" Hoping she might say something like You've written a masterpiece, I shook my head and waited for her answer. "You were scratching your forehead with the wrong end of the pen, and now you've got writing all over your forehead."

All these years and questions later, and I know what I was starting to realize even back then. It took me a while, but I figured out who I am.
Posted by Seré Prince Halverson at 9:24 AM 16 comments:

81 Looks Damn Good on Him 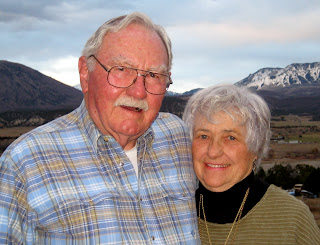 Happy Birthday to Bill.
Part stoic cowboy. Part teddy bear.
A wise philosopher
Who never met a tractor he didn't like.
Well read. Well spoken.
Friend to yaks. And kitties.
Calls the chickens "Ladies" and his lady "Sweetie."
Grills a mean steak.
Has a kind heart.
Loves PBS,
Westerns,
Snow-crested mountains,
And my mother.
Posted by Seré Prince Halverson at 9:31 AM 6 comments: