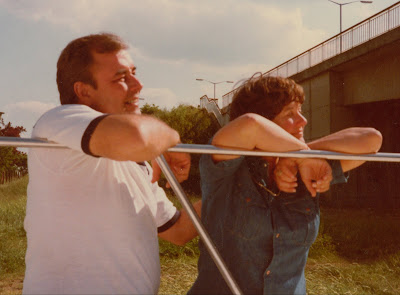 Today is my stepmom Jan's birthday. She moved in when I was 15 and my sister, Suzanne, was 13, and, well, imagine what a hoot that must have been. Jan and her sweet, gentle six-year-old son, Marc, walked in, ducking flying hairbrushes and Tampax, our hormone-fueled yells competing with Peter Frampton blasting from the living room stereo. (What on earth, besides clothes, did Suzanne and I fight over? All that energy and rage directed at who was wearing whose Baretraps and Chemin de Fer jeans...)

Amazing but true: Jan and Marc didn't scramble back into her little red Luv truck and peel out, though at times they must have wanted to. They stayed. And we became a family. Oh, we were still a dysfunctional family, as most families are -- at least the interesting ones. But we also managed to enjoy the heck out of each other. We still do. And Jan helped to make that possible.


Two teenage girls and one new stepmom does not an easy transition make. I know this from being both a stepdaughter and a stepmother. But Jan has a seemingly endless reserve of grace and compassion. She also has a kick-ass sense of humor. She immediately dubbed herself M.O.S. for Mean Old Stepmother, which is a bit like George W. Bush referring to himself as, let's say, an intellectual, heh, or Scarlett Johansson calling herself homely.

Jan never took her role as stepmother too seriously. She didn't push herself on us. She didn't set up new house rules or demand that we be home at such-and-such a time for dinner. She brought home bags of Jack in the Box and leaned against the kitchen counter and simply listened. She simply loved us, even when we were at our most unlovable. And we couldn't help but love her back.
I wish I could be half the stepmom she is.
Happy Birthday M.O.S.
Posted by Seré Prince Halverson at 11:13 AM