The Place Where You Go To Listen 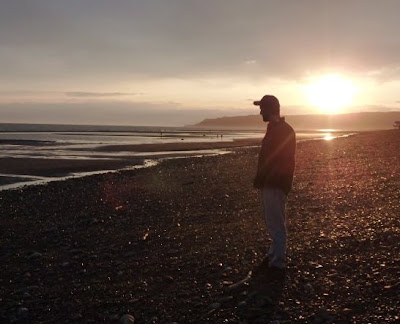 When I was in my early twenties, I drove up the Alcan, the Alaskan Canadian highway, with my then soon-to-be-husband, who was from the Kenai Peninsula in Alaska. I have always had a deep sense of place. It's not hard for me to picture myself living in beautiful spots I visit. But I have never fallen so hard for a place as I fell for Alaska. The fierce mountains, aqua water against blue-white glaciers, the trees that never stop, the wildlife around every bend -- it all crept under my skin and stayed.

As we drove from the Kenai up to Fairbanks, we plotted our life together. Perhaps he would transfer up to University of Alaska at Fairbanks to finish his engineering degree. Then we would raise a family. I saw a cozy cabin in the woods. Stomping off the snowshoes. Writing with kids in my lap.

I've always been a bit of a naive romantic, if you haven't gotten that yet.

But when we arrived in Fairbanks, we changed our minds. Fairbanks is not the Alaska of the cruise ship ads. There are no close-ups of jagged mountains and glaciers falling into the sea. It lies more flat and open, the mountains at a distance. And Fairbanks gets a lot colder than southeast Alaska or the Kenai Peninsula  -- 50 below zero is not uncommon in the winter. At that time, rents were double what we would be paying in central California, and we were broke.

We decided to finish school back in California and then move to Alaska, perhaps to Homer, the place where I stood on the spit and looked across the Kachemak Bay to the most incredible mountains and thought, simply, yes. Or maybe we'd even move across the bay to a little hamlet called Halibut Cove. A cabin on stilts. The perfect life for a writer, perhaps. Not so much for an electrical engineer.

So then life happened. A successful engineering career in San Diego happened. A couple of amazing boys were born. A fixer-upper was purchased. All through this, Alaska pulled on me. It felt like a big, missing piece, the one with all the right colors that would somehow make everything whole.

I was young. I can see now that Alaska was my "If only..." Something with a shape I could yearn for, point to as the fix-all solution to the broken parts of my life. Now I know there is really no one such thing. That our obsessions can simply be welcomed distractions from the painfully obvious. But back then, I felt that Alaska was My Answer.

And then a divorce happened.

I still thought of Alaska, but I stopped longing for it as a way to escape. Things had changed. I had changed. Alaska became a place where my ex-husband's extended family lived, where my boys and he went to visit, but not I.

Until several years ago, when I found myself on a business trip to -- of all places -- Fairbanks, Alaska. I never traveled for business. I write at home and getting myself properly dressed and to a meeting can feel like preparing for a six-month journey by covered wagon when I'm really just driving to the next town for an hour.

But there I was, in a borrowed parka flying north, because in the more than 20 years since I'd last been there, Fairbanks still hadn't managed to find itself any glaciers dropping off into the sea, leaping whales, or king salmon. So how do you draw tourists? the town leaders wanted to know. I was part of the creative team hired to help them figure that out.

I met up with three others -- a V.P., an account exec, and a research guy -- none of whom I'd met before, all a bit younger and more energetic than I was. We hit the ice running at seven a.m., talked to a lot of friendly locals, went dog sledding, flew into a village in the Arctic Circle, witnessed incredible ice sculptures, sat at an ice bar in an entire hotel made out of ice, talked to more friendly locals, and saw the Northern Lights. I crawled back into bed after midnight to do it all again the next day.


I was out of my element in many ways, but I ate up every minute of it because I realized, even twenty years later with all the changes I'd gone through, I was also in my element simply because I was in Alaska. There's something about that place. And yes, even Fairbanks held a distinct magic for me.

Our schedule was so packed that I didn't have a lot of time to think, to absorb the feelings of the full circle of it all, of how much had changed since I was last there, twenty-two and about to be married, full of plans that didn't pan out, now living a life so different from what I'd imagined then.

But then, when I interviewed some of the faculty at the University of Alaska in Fairbanks, they directed me to the Museum of the North, and to a specific exhibit.

It was a white room with a single bench before five glass panels of changing colors. The exhibit creator was composer John Luther Adams, who interprets the real-time natural events of seismological and geomagnetic data into sounds. In other words, the shifting of the earth, the dancing of the Northern Lights, the cycles of the sun, the moon, the stars all become music for the ears to hear.

It is called The Place Where You Go To Listen.

I entered, and was alone. I sat down, pulled off my wool gloves, set down my bag, my notebooks and pens, my recorder. I sat and I listened. I could distinguish a humming, then low distant booming, sustained chords, and even the chiming of bells representing The Aurora Borealis.

And I started to cry. Not just a little mist-in-the-eyes cry. The tears came unexpected and fast, streaming down my face, dripping onto my jacket, even before I could wipe them away.

I felt the wonderment of a child, as if I'd been given the privilege of holding Alaska to my ear like a conch shell. How could it be? That I could hear the actual music of a place, that a place can sing its own song? I felt connected to that song, that place, and could feel the connection from my unfulfilled longing dream-life to my actual life, the one I had lived and been disappointed by, been joyously surprised by, the life I'd been torn by grief and buoyed by laughter by. The life I was living. Still.

Still writing, still loving, still enthralled and moved by nature, and yet in a different place that I also felt passionate about, with trees and water and wildlife. I could still love Alaska, even if I never lived there. And I'd learned enough about life to know that someday, I still just might. Who really knew? Who really knew? But older, sometimes wiser, I did know this: Alaska wasn't The Answer. That's just too much pressure to put on one state, even one as big and bold and brave as Alaska.

In that room, I heard the door open and close. People leaving the crazy lady alone, perhaps, or visitors looking for the Ice Age steppe bison mummy exhibit, not a bare white room. Did I mention that the white room was padded?

I dried my face and pulled myself together. After all, this was supposed to be a business trip, not a Vision Quest. But I left different than when I'd entered. A bit more whole, somehow. Ironically, I had found a missing piece. Not the missing piece, mind you. But one of them.

Back when I was obsessing about Alaska, I was also obsessively reading the author Frederick Buechner, an ordained Presbyterian minister and masterful writer who helped start me on my way from a blind type of faith to a more spiritual, open way of seeing and being...and listening. This is one of my favorite passages of his:

"Listen to your life. See it as for the fathomless mystery that it is. In the boredom and pain of it no less than in the excitement and gladness; touch, taste, smell your way to the holy, hidden heart of it because in the last analysis all moments are key moments, and life itself is grace."
- Frederick Buechner
After I went to The Place Where You Go To Listen, more full circles formed in the scribbles of years, and many more moments of grace. As I've mentioned here before, my husband and I recently moved to a cabin in the woods near a river. A cabin on stilts, no less. It's in Northern California. It's a bit warmer here than Alaska. There are no jagged mountains or glaciers. But we're twenty minutes from a perfect whale watching spot. We've started kayaking. We see osprey and eagles, seals, great egrets, blue herons, mergansers, and many more birds...I'm still learning their names.

When I am out on the water, or walking in the woods, or writing at my desk on the screened-in porch, I know I have found here my own places where I go to listen.

There's more: My oldest son now attends the University of Alaska in Anchorage. His girlfriend, Sam, is from Fairbanks. Daniel is studying biology and spent the last two summers in the wilderness, working for Fish and Wildlife, living his dream. When people assume he inherited his passion for Alaska from his dad, who was raised there but still lives in San Diego, Daniel chuckles and says, "Well, actually, I got it from my mom."


I guess he was listening.
Posted by Seré Prince Halverson at 5:49 PM

Email ThisBlogThis!Share to TwitterShare to FacebookShare to Pinterest
Labels: Alaska, Frederick Buechner, John Luther Adams, Kachemak Bay, life plans, listening to your life, sense of place, The Place Where You Go To Listen